A 5-day trip to Hue and a brief bout with food poisoning have delayed my most recent post, and there’s a lot to catch up on!

In Cam Duc, we’ve been holding strings classes every other afternoon. Each volunteer is assigned to 2-3 students, whom we work with for about an hour and fifteen minutes before gathering as an ensemble. I have been teaching three girls about 10 years old: An, Anh, and Thu. They have been playing for 2 years, and are working their way through Suzuki book 1. All three have a lot of energy and personality – they love to chatter and laugh and tease. But they also have a great deal of focus, and will practice with me as a group for as long as an hour and a half. They love to play and to learn new things, which they pick up quickly. They’re a lot of fun to work with!

After our small group lessons, everyone gets together to play as an ensemble. The younger students will play the pieces they have been working on, then the older students, and then we all play a Vietnamese song called Trong Com to wrap up the day.

The older kids will usually stay for a while after class, teaching dances to the American volunteers and playing games. Sometimes we’ll also go out for sinh to (smoothies) or sugar cane juice. We must be quite the sight on our way to the café, there are so many of us, traveling all together on motorbikes and bicycles and on foot. 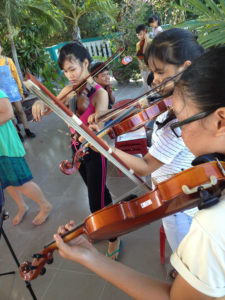 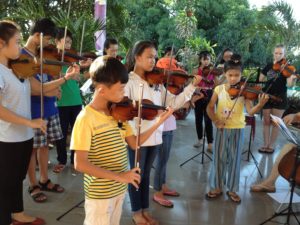 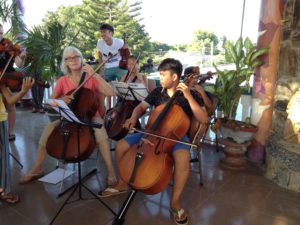 Last week we held our second arts and music camp in the village of Son Tan. Son Tan is a smaller community than Soui Cat and RPS has a year-long presence there through its weekend art classes, so this second camp was much more manageable than the first. Instead of 300 kids, we had only 100 on the first day and about 150 by day 3.

We followed the same daily format as the Soui Cat camp: a concert, music activities, an art project, and parachute games. As part of the music section this time, we performed and taught a dance that our Cam Duc strings students had been practicing with us. We also had a new art project: we found out that An’s  mom makes gift boxes to sell at book stores and gift shops, and had her make 200 blank boxes for the kids at the camp to decorate with magazine cut-outs. Everyone really enjoyed it – even the moms got involved, decorating boxes for their babies. 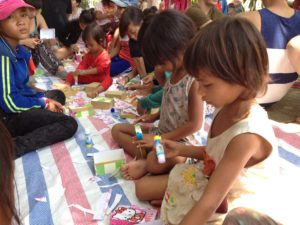 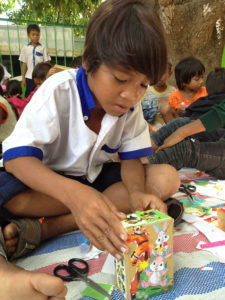 We spent the weekend and the beginning of this week in the city of Hue – a one hour flight from Nha Trang airport. Unfortunately, much of our plans there were waylaid by a rash of food poisoning. Nearly everyone was sick for at least one day, and unfortunately I was still in bed during a scheduled art show by the students in the Hue art program. However, I recovered in time to participate in a visit to a local orphanage, where we played a short concert and made pipe-cleaner sculptures with the children. Laurette and Rozanne were also able to meet with Phoung, RPS’s program director in Hue, who will also soon be the violin teacher for the new music program. Together they went over the basics of teaching beginners, and will be in touch with Phoung through skype whenever he needs help or advice.